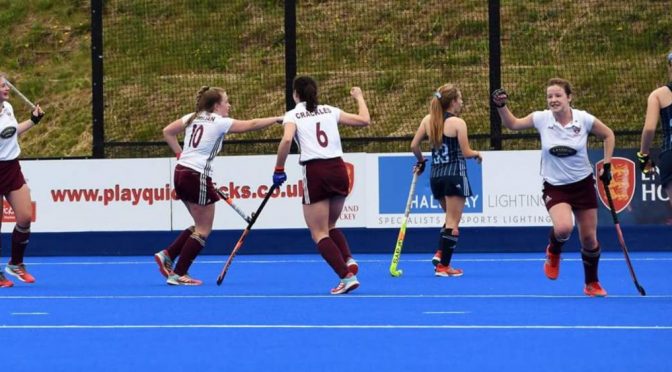 The large travelling support saw Rhydding get off to a flying start against last year’s runners up and favourites Reading, when Rafa Brandao-Lee opened the scoring with a rasping drag flick past their opponents’ international keeper.

The lead was short lived and Reading replied in clinical fashion when they pounced on a slow transfer in the Rhydding defence to force a penalty corner, which they equalised from.

Reading started to dominate the play. Despite last-ditch defending by Nisha Cant and Abi Prentice, Reading converted three more chances to lead 4-1 inside the first 22 minutes.

Rhydding’s captain Becky Hadfield moved into the centre of the defence in an attempt to stop the fast pace Reading attack, but it took time for her side to find any sort of rhythm.

Sophie Dale was key in Rhydding not conceding again before the break, while the tireless work of Fiona Crackles, Lucy Williams and Matty Jaggar in the midfield gave Rhydding hope.

Ella Mawson and Anna Pateman had chances late in the half but Rhydding generally struggled to create openings.

As Rhydding left the field for the half-time break, the relief was that the deficit was only three goals.

The second half saw a far more positive Rhydding take to the field. From the first whistle they pressed Reading and began to win possession deeper in their opponents’ half.

Brandao-Lee hit the post twice, Niamh Brennan had her shot saved before Kirsty McMillan won the ball from the Reading full back and played Lauren Ellwood in on goal.

The resulting reverse stick strike flew into the net and Rhydding were back in the game.

Despite the Yorkshire side having more possession and territory, Reading were still a threat on the break and repeatedly won penalty corners on their visits to the D.

Dale and the Rhydding defence held firm and began to find space out wide with Milly Fewlass-Jones, Julie Cumberland and Izzy Weir all attacking from deep.

Crackles began to show her class in midfield and kept the momentum going forward winning another penalty corner. Hadfield scored Rhydding’s third goal from the resulting well-worked penalty corner and with six minutes left the comeback was almost complete. As Rhydding pushed for the equaliser against a now less than comfortable Reading side that was digging deep to hold their lead.

The dramatic final minute saw another save from the Reading keeper and then a fast break to score their fifth and decisive goal with less than 30 seconds left.

The match ended 5-3 to Reading, but the Ben Rhydding girls, although disappointed, will be proud of their performance.

The silver medal is the girls second of a remarkable season. They narrowly missed out on the National Indoor title in January, losing by a single goal in the final.

Next season will see 12 of the 16 girls still eligible to play for the under-18s again, so there is optimism they can go one better next time.