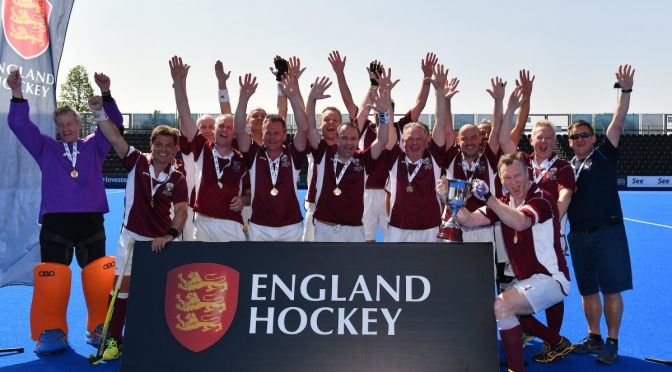 Ben Rhydding’s over 50s team travelled to the Olympic Park Lee Valley Stadium to face Isca (Exeter) Hockey Club. Having won in 2014 and 2016 and losing in the final last year, it was a great achievement to make the final again. However, every member of the team felt that winning would be the only satisfying outcome.

On a baking hot day, the self induced pressure on captain Neill Moore and his team was immense. Isca had put the mighty Reading HC out of the competition to reach the final and were always going to be tough opponents.

Manager Richard “Butch” Terry kept the team as fresh as possible by use of the strong bench and in the second half Ben Rhydding got a better grip on the game. The quality that Ben Rhydding were able to deploy up front (Rob Ward, Billy Marwaha, Ian Cussons, Howard Pickard and Jonathan Till) meant that they were always in with a chance of scoring and the goal duly came from Ward after some slick passing and a finish that the keeper was never able to predict.

The last 15 minutes were naturally very tense but Isca were restricted to one shot on goal which hit the post. The fitness of Fraser Priestley and the sensible use of the bench meant that the midfield combinations of Brian Kempson, Jon Bray, Richard Pughe and Mark French maintained enough control and the clock was run down to secure a 1-0 victory.

Winning a third national title in 5 years by a club from modest sized town in the north of England is a massive achievement. Probably 3 massive achievements! The title isn’t just about the final, all the rounds matter as there are no second chances, so everyone who played in the competition this season made a key contribution. These players are: Paddy Hagan, Neill Moore, Andy Locke, Neil Horsman, Hugh Lambert, Fraser Priestley, Brian Kempson, Jon Bray, Richard Pughe, Billy Marwaha, Ian Cussons, Howard Pickard, Jonathan Till, Mark Westwood, Rob Ward, Mark French, David Cutter and David Habin.