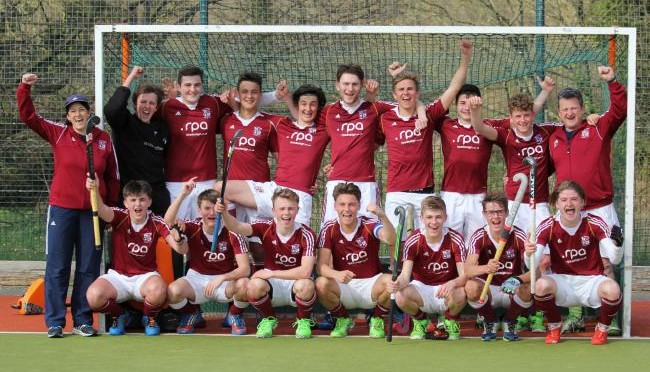 A NAIL-BITING game ended with the gritty and tenacious Ben Rhydding side gaining a place in the National Cup Final against Surbiton at the Olympic Park in London next month.

Despite the backing of a large crowd, Ben Rhydding looked nervous and hesitant in the early part of the game and struggled to find any flow.

Skipper Will Tench was the only midfielder getting on the ball and he led by example throughout with dynamic and determined running.

Will Hatton, always presented a threat when he got on the ball in the circle but Peterborough were alert to the threat.

Both sides had their chances in a goalless first half. Peterborough forced a dozen corners but Rhydding’s well-drilled corner defence proved impenetrable and Alex Johnson in goal was magnificent.

With a key tactical change, Rhydding came out hard in the second half. Matthew Ramshaw and James Cutter began to dance through midfield more convincingly and Charlie Smith pulled the Peterborough defence around.

Mike Moore pressed intelligently and Sam Stewart made good connections. The beautiful creativity of Matty Sykes found Joe Cussons on an aggressive lead, drawing the foul and gaining a valuable corner. Young star, Ramshaw took this single chance and smashed it home to open the scoring.

Lewis Wild was outstanding in defence, and Tom Burton absorbed the intense pressure applied to him on the left and played with composure.

Will Bradley, who reads the game so well kept the flow going in the right direction. Olly Hopkinson Cook, such a fierce competitor, worked hard to disrupt Peterborough’s passing and Aaron Terry’s ruthless marking kept Peterborough’s winger out of the circle.

It was Cutter who delivered the most sparkling of goals to extend the lead. He scorched the ball into the roof of the net from a difficult angle.

Peterborough did not roll over and got a goal back. With seven minutes to go, they took their keeper off in an attempt to claw the game back but again, Johnson was outstanding in goal.

Rhydding should have made it 3-1 with a corner but tension got the better of them and a frantic final few minutes saw them hang on for victory and claim their place in the final on May 3.